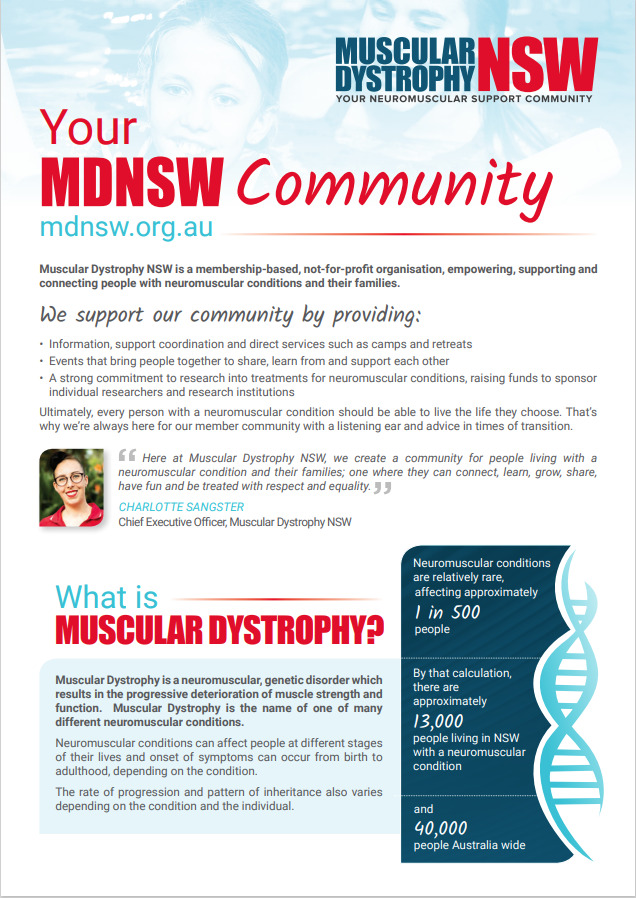 At Muscular Dystrophy NSW, our mission is to empower, connect and support people with neuromuscular conditions, and be an effective advocate for the neuromuscular community.

We achieve this by providing:

Our dedicated team bring a wealth of experience, commitment and enthusiasm to our work.

The board of Muscular Dystrophy NSW brings together medical and private sector professionals, some of whom live with, or have a loved one living with a neuromuscular condition.

The Constitution and articles of association sets out Muscular Dystrophy NSW’s structure and operations in fulfilling its role of representing the interests of people with neuromuscular conditions, their families and the community in general.

Muscular Dystrophy Association of NSW (MDNSW) commenced operation in 1957 as a specialist support group within the Society for Crippled Children, now known as Northcott Disability Services.

People living with neuromuscular conditions, and their families, were instrumental in setting up MDNSW as a separate entity from Northcott.

For over 60 years we have been building on the passion and commitment of our founders for improved outcomes for people with neuromuscular conditions.

In the early days, all the Association’s work was voluntary and was done by family members. Our name and logo was changed to Muscular Dystrophy NSW in 2008, to reflect our status as one of several state and territory MD organisations within Australia, providing services to people affected by neuromuscular conditions. 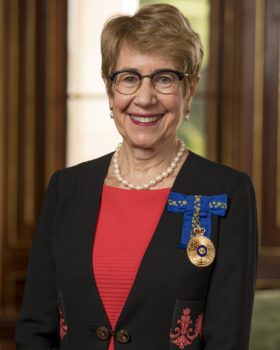 Her Excellency the Honourable Margaret Beazley AC KC is the 39th Governor of New South Wales, commencing her five year tenure on 2 May 2019.

Prior to her appointment as Governor, Her Excellency enjoyed a long and distinguished law career spanning 43 years, during which time she served as a role model for women in law at both the State and national level.

She was made a Companion of the Order of Australia in the Australia Day Honours List on 26 January 2020 for “eminent service to the people of New South Wales, particularly through leadership roles in the judiciary, and as a mentor of young women lawyers”.

Her Excellency has three children – Erin, Lauren and Anthony Sullivan – and is married to Mr. Dennis Wilson, a barrister, mediator, accredited international arbitrator and Adjunct Professor of Law, at Notre Dame University, Sydney.

Her Excellency brings her deep commitment to education, youth leadership, human rights and social justice to the role in service of the people of New South Wales.