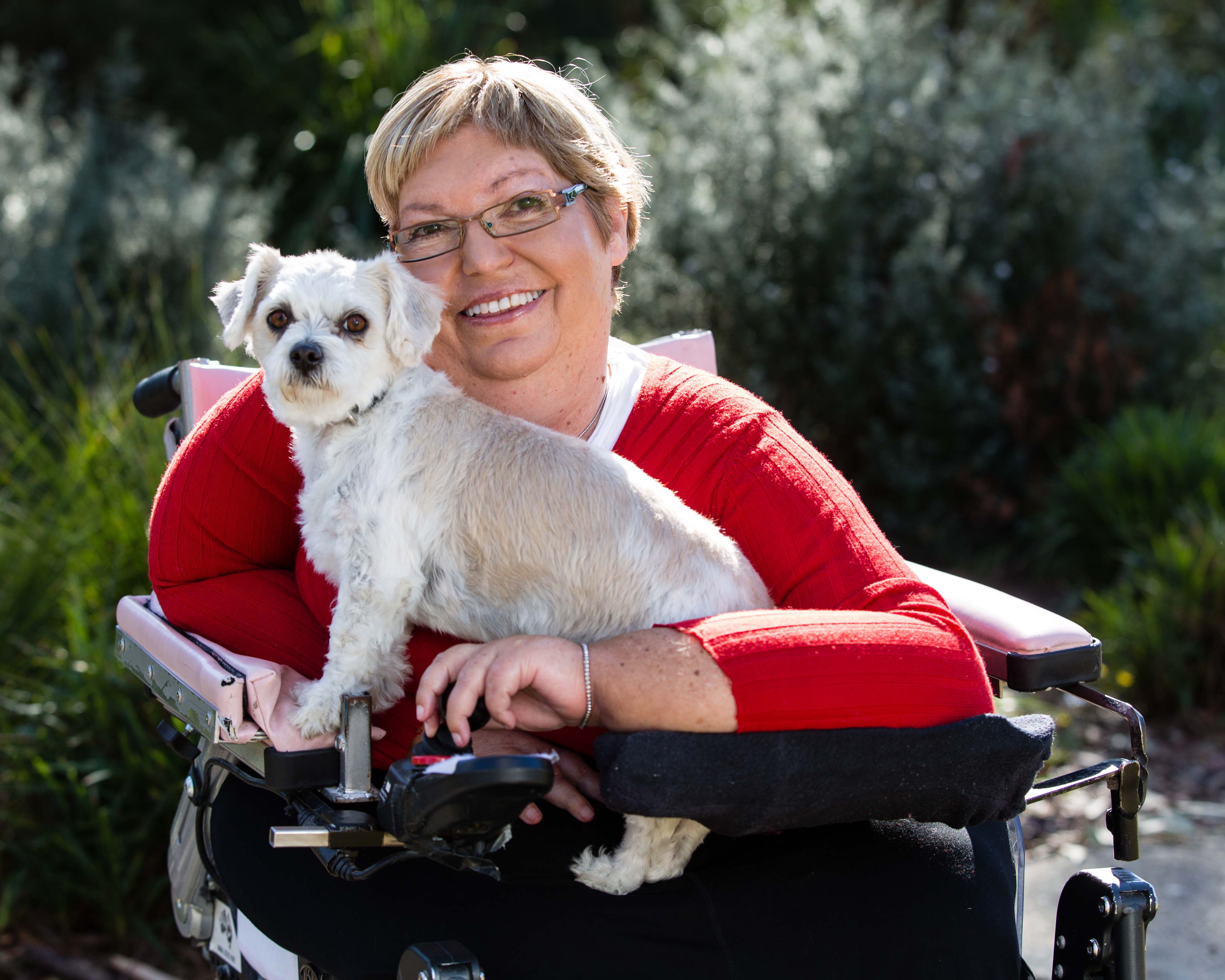 My name is Ellie Robertson and I am a woman living with Spinal Muscular Atrophy Type II.  I get around in a motorised wheelchair as I have done for most of my life. I have never walked. Over the years my condition has gradually deteriorated. I now have very limited movement in my hands. Ironically, I am now busier and more active than I have ever been in my life!

I love life. I have been given this gift of life and I not only want to enjoy every aspect of it, I want to make sure I put it to good use that can help others and the world around me. The biggest passion in my life has always been animals. I love all animals, the big, the tiny, the beautiful and the ugly, although none are ugly to me!  I love the great outdoors, travelling, dining out and watching good movies at home with my cats.

I grew up in Bondi on the Eastern suburbs of Sydney where my youth was filled with going to the beach all summer long, hitting the fantastic shopping centres there and having lots of friends – especially boyfriends!

I was blessed with the best parents a girl could have always encouraging me to live my life independently and allowed me the freedom to grow and develop and become my own person.

Even though I went to a special school, I never thought of myself as “disabled” and neither did my friends outside of school. However it was at school that I met Jim, my soulmate and future partner for over 12 years.  Jim lived with haemophilia which is a disorder of the blood that prevents it from clotting. It is treated through blood transfusions.

After I left school, I entered the NSW public service where I began full-time work as a telephonist, then moved into several front desk receptionist roles, moving up to supervisory roles.  I held a job with NRMA for 2 years which required me to catch a train every day. It wasn’t always smooth sailing catching the train! I would have a mini panic attack hoping the guard on the train would not forget me to bring the ramps and let me off the train at my destination. Yes, a couple of times they did forget me, and I would end up several stations away. Travelling to my office from the train station also posed challenges on windy rainy days as I would be seen trundling along with a big plastic raincoat blowing everywhere!

In the early 90s I joined a band as a lead singer. All the band members had some form of physical disability. It was a wonderful time of performing at community centres and malls and we even got a gig on Bondi Beach and at a well-known pub in Balmain!  My last job was with Centrelink as a bilingual customer service advisor where I stayed for 13 years.

After losing my father through a heart attack, I suffered another tragic loss when my precious Jim succumbed to HIV-related complications acquired through one of his blood transfusions. I will never get over losing him but I wouldn’t trade a second of the love we shared.

I left my band and decided to start my own band with my best friend. We placed an ad for a guitarist and a keyboard player and I met my future husband David!  Together we built our first home and travelled extensively going to places like Uluru, Cairns, Greece, Melbourne and all around NSW. Now we have built our second home which is larger and has a granny flat for my Mum.

I increased my involvement in animal activism going to many rallies, meeting with MPs, writing letters and submissions and joining many animal and environmental organisations.

After leaving Centrelink I retired from the general workforce and spent 3 years as a Living Life My Way Champion travelling all around NSW delivering talks and presentations on what it’s like to manage my own personal care funding.  I have been managing my own government funding for several years now. Firstly through the Ageing Disability and Home Care programs, and now through NDIS.

For the last four years I have been heavily involved in the political arena.  I have previously run for three elections representing The Animal Justice Party. In the 2016 federal election for my seat of Hughes I got 4 percent of the vote! I also ran in 2016 for the Liverpool City Council elections as well as the 2017 Manly by-election. And I ran as an independent candidate for the Legislative Council in the 2019 state election.

I have travelled, worked in open employment, married, built 2 homes and entered politics!

My motto in life has always been “why not?” I don’t like to take “no” for an answer if it is something I really believe in or have a passion for. I feel everyone has so much to contribute in different ways and I really dislike to see people wasting their lives being self-absorbed and lazy.

I don’t see obstacles, I see challenges and opportunities where I can prove to others that having my disability does not define me or hold me back.  In today’s world of technology and social media there is no reason that anyone with SMA or similar disabilities cannot reach for the sky!